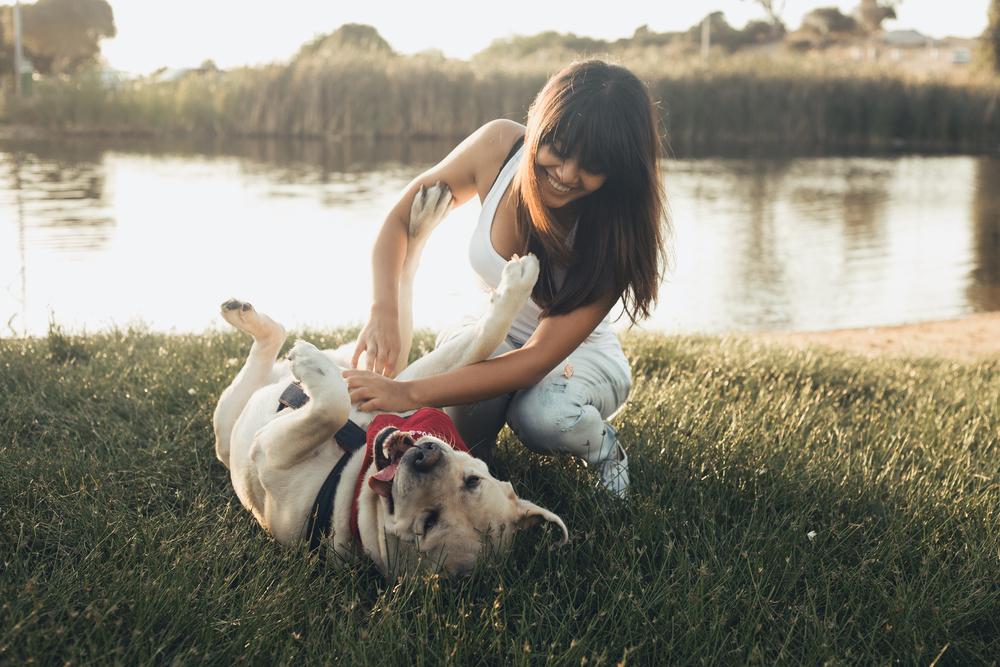 Every year we look forward to enjoying summertime together with our dogs, but as soon as the temperatures rise, ticks start to bite and have our pets in their grip. Every owner will sooner or later have to deal with them. While some only use their tweezers to pull out tick by tick, you should know that these small animals can be dangerous and even lead to diseases fatal for your dog. This article will tell you about how to protect your dog from ticks, which diseases are spread by them and what else to look out for.

What kind of ticks are there?

Worldwide there are about 850 different species of ticks, not all of them are found in Germany. Dogs in Germany are mostly bitten by the black-legged/deer tick or the dermacentor reticulatus. Statistics shows that other species are getting more and more common as well and this trend is likely to continually rise. Among them are the brown dog tick, ixodes hexagonus and the dog tick.

What kind of disease can be spread from tick to dog? 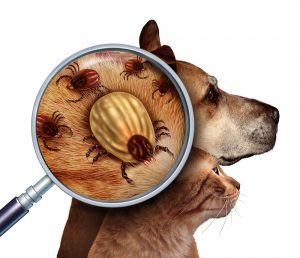 Diseases spread by ticks to humans are limited to borreliosis and early summer meningitis. Unfortunately this is not the case with dogs. Depending on the tick species and their origin, there are various diseases with different outcomes for the dogs. This article will also show you what symptoms are typical for any of the diseases so you can better recognize and treat them.

This is a disease fatal for dogs, which completely destroys red blood cells, similar to malaria in humans. For this reason, the disease is also known as canine malaria. It is mainly spread by dermacentor reticulatus and the brown dog tick. Transmission time is 48 – 72 hours after biting and the occurrence of first symptoms usually takes 5 – 7 days, with some isolated cases taking up to three weeks.

This terrible disease usually starts with a very high fever of up to 42 degrees Celsius, a strong thirst and a low appetite. The dogs will suffer a loss of stamina and weight as well as weariness. Further process of the disease is characterized by the destruction of red blood cells, leading to anemia, jaundice and red or green urine. Furthermore it is possible that the skin or the mucous membranes suffer from a hemorrhages. Inflammation of the mucous membrane of the mouth is also a common symptom. Unfortunately, the central nervous system is also often affected, leading to movement disorders, paralysis or epileptic seizures.

For many dogs, this disease is fatal. For this reason it is important to always watch your dog closely during summertime and immediately visit the veterinarian when you suspect having discovered any symptoms. Only when the disease is discovered early enough your dog has a chance of survival. 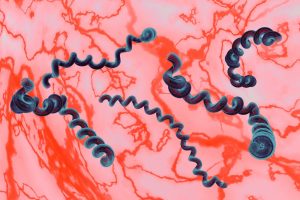 Borreliosis is the most well known disease and can also affect humans, not only dogs. This is a bacterial disease, in which joint disease can lead to movement disorders. It is spread by the black-legged or deer tick, with a transmission time of about 16 – 72 hours after the initial bite. Time between infection and occurrence of the first symptoms usually takes between two and five months.

The symptoms are not always easily recognized since many dogs do not show any signs of this disease at all. The most common ones however are loss of appetite, high fiver and weariness. After some time has passed, movement disorder may take place, combined with pain and a paralysis. Later on, a heavy organ damage may occur, mainly regarding the kidneys and the heart. Further effects include nerve inflammation as well as a hypersensitivity in the back area, a heavy transpiration and an inflammation of the skin. If this disease is recognized early enough, it can normally be treated by medication without any problems..

In anaplasmosis, white blood cells are destroyed. This heavy disease comes in phases, appearing every 2-3 weeks and are easily recognized by fever and general uneasiness. The immune system of healthy dogs can mostly battle the pathogen on its own, others need a medical support. Anaplasmosis is transferred by the black-legged/deer tick. Transfer time takes up to 24 hours and the first symptoms appear after between one and eleven days.

Very high fever as well as apathy and loss of appetite are the most common consequences of this disease. Vomiting, diarrhea as well as symptoms related to the central nervous system are parts of anaplasmosis as well. Dogs lose their will to move, suffer from paralysis or painful joint inflammation. The inner organs as well, like the spleen, kidneys or eyes are affected as well. Some dogs even go blind.

This disease may affect humans and dogs as well and attacks the host’s immune system. It is transferred by the black-legged/deer tick and can be treated with medication. Transfer is initiated within minutes after the bite and you can expect first symptoms two to three weeks after infection.

FSME leads to heavy disorders and can in rare cases be fatal, for dogs as well as for humans. After infection a high fever will occur, accompanied by heavy cramps and movement disorders as well as paralysis and neurological symptoms. Hypersensitivity on the head and neck are common as well. Changes in behavior may also occur, ranging from apathy to aggression. Because brain nerves are destroyed, facial paralysis is also a symptom.

What can you do against ticks? 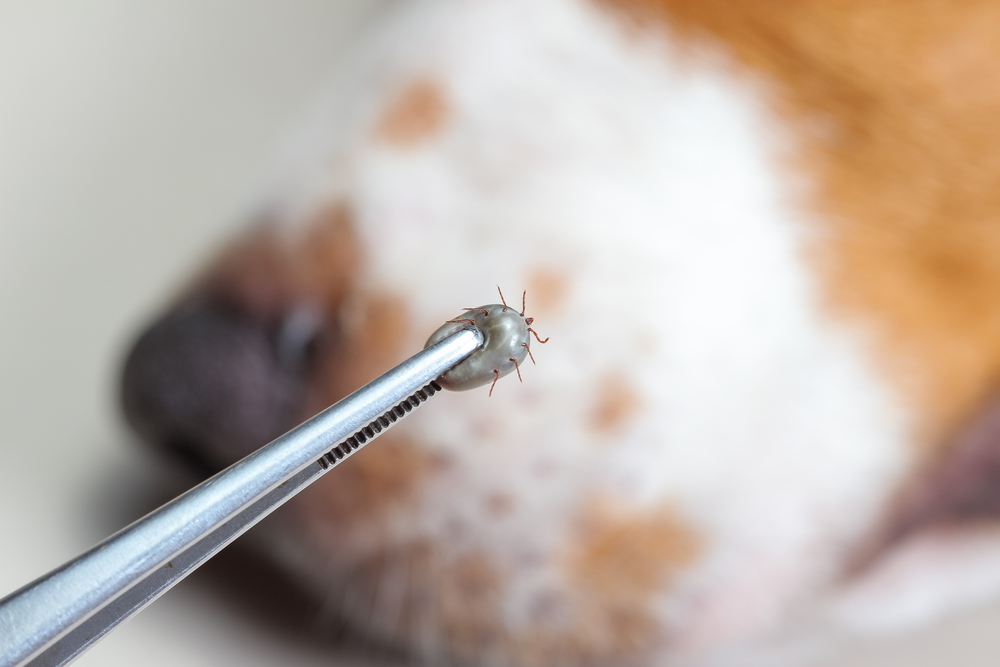 As you can see, ticks are not just small and annoying insects that want to suck human and dog blood. They also transfer vicious diseases that cause a lot of pain and can be fatal. For this reason it is important to prevent this from happening.

If you find a tick on your dog, you will have to remove it immediately. Special tick tweezers are ideal to use for this and help in getting the insect directly at its head in order to pull it out completely without any leftovers. Should any part of its head remain inside the skin this can lead to inflammation quickly. Furthermore the tick will vomit if it is pressed on its stomach area, meaning that all poisonous substances are discharged into the blood.

There are different methods for prevention. Unfortunately there are no vaccines for dogs against disease spread by ticks, except for borreliosis. So you as an owner have to provide medication which prevents ticks from being able to attach themselves to the skin. There are various products which we will present to you further.

While many experts are convinced that garlic could be dangerous to your dog, only small doses are needed to deter ticks, so there is nothing to fear for your dog. You can use fresh garlic as well as granulate or powder. Just add it to the regular dog food. Even if garlic deters the ticks by causing an unpleasant smell of the dog’s skin, it is also proven that your dog may still get bitten from time to time.

Many dog owners love using amber necklaces when deterring ticks. It is however important to use untreated and real raw amber. Furthermore it constantly has to be in contact with the skin, which is not an easy task with dogs, in contrast to us humans. The dog will also have to wear the necklace constantly. When used correctly, ticks only very rarely bite anymore.

Homeopathy is very popular for many owners to protect their dogs against tick bites. This method of protection is very controversial though and there are many negative opinions on it. The most used substance is called ledum, given in the form of globules in a four to eight week rhythm. As a potency, experts recommend C200 and the dose should be three to five globules.

Coconut oil contains lauric acid and studies have shown that this acid is very unpleasant to any parasite, so that ticks will not bite in the first place. In order for this to work, your dog will have to be treated with coconut oil once a day, which means you should only do this if you have a dog with very short fur.

Natural tick deterrents at a glance: 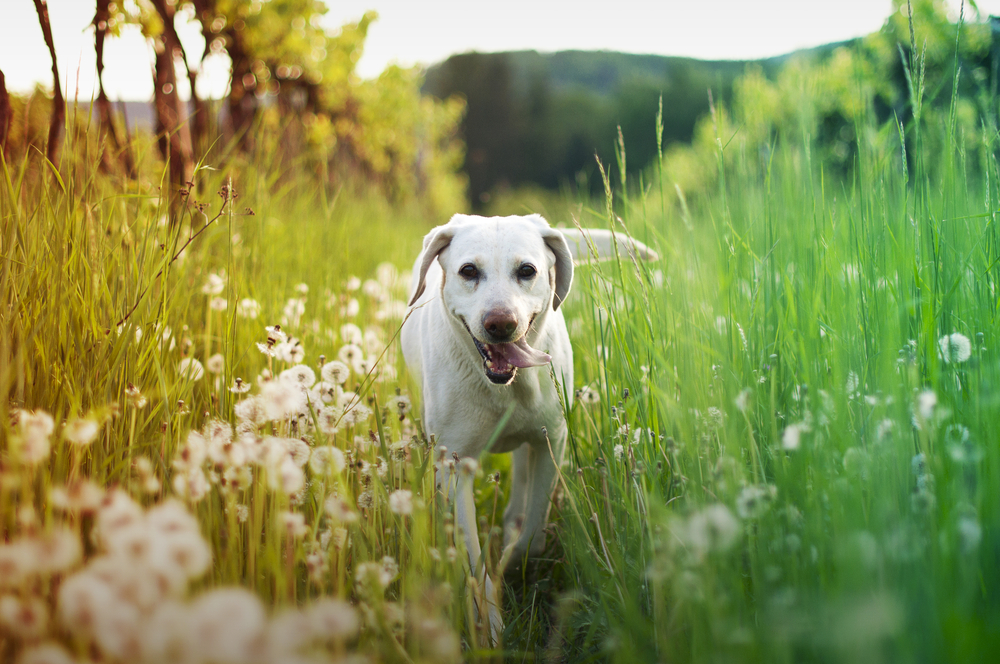 Chemical deterrents are in contrast to natural ones very effective and show that affected dogs are, if at all, rarely bitten by ticks any more.

Tick collars are easy to use and are shown to be very effective. They do not make your dog immune but rather deter the ticks from biting in the first place. Ticks leave the dog since it will feel unwell because of the collars’ active ingredient. Ticks that refuse to leave are paralyzed and will either be unable to move or move very little anymore. A bite is completely prevented by this. Finally, the tick will die because of nerve damage caused by the ingredient. Normally, the tick will have left the dog already at this point of time and is not to be found anywhere in the fur anymore. How long the collar lasts is dependent on the brand and you should inform yourself before buying one. It lasts longer than any

Spot on substances are also very popular and are recommended by many veterinarians. These are pesticides, which are given to the dog with a one-way pipette, dropped onto the neck and the tail. They last only up to four weeks so that you will have to renew them after this time. The active ingredient has the same effect as the one contained in tick collars.

Unfortunately, chemical substances against ticks have been shown to cause side-effects from time to time. 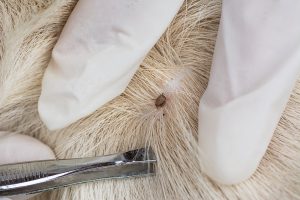 Unfortunately there is a trend of the ticks living in our regions to get more and more resistant against the different kinds of deterrents, so more dogs are affected. For this reason the market of substances against ticks is growing, many of which are still in their testing phase though.

Nowadays it is possible to vaccinate dogs against borreliosis. This vaccination is now a recommended one for every dog living or going on vacation in tick infested areas. It is not without side-effects though, so that even many veterinarians counsel against vaccinating your dog. Often they recommend using a tick collar instead of applying any vaccine. 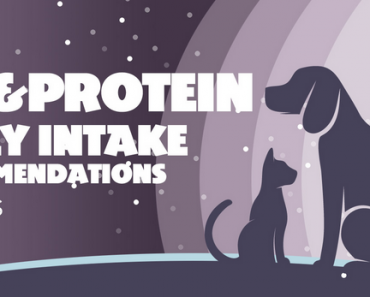 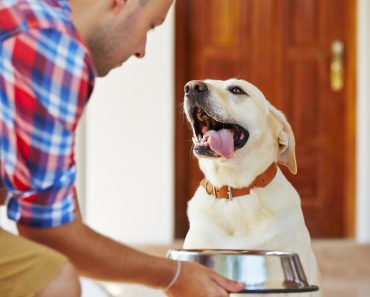 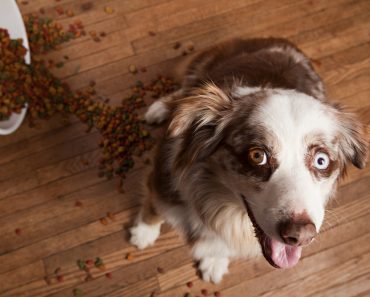 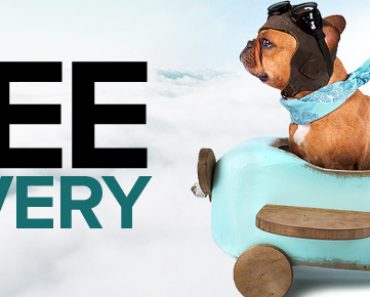 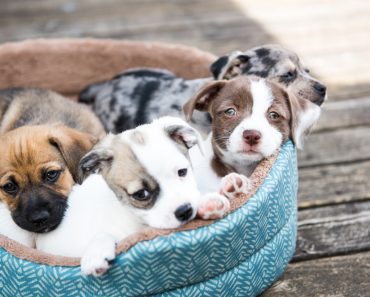 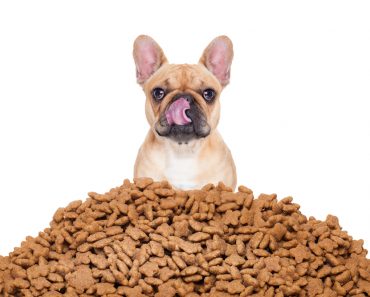